It is hard to believe how things have changed in the last month. February 14th came and we received a record payout for profit sharing. No one seemed to noticed the storm on the horizon. Now, about a week away from April, I wonder if I will have a job beyond April 30th.

The coronavirus continues to spread and the world have freaked out. When it first was announced things were bad and international flights were being cancelled to/from certain countries; I was working the international fleets at the airline where I work. One day I saw planes busy with flights, the next, they were sitting on the ground more. More and more planes were flying less and less. Some planes were simply parked.

I started the following week on a domestic fleet and it wasn’t affected by flight reductions. Midweek I was moved back to international. The reduced schedule was noticeable. Some of the 767s with crew rest facilities; they mostly flew to Asia, were doing some domestic flights. Between news items comments from company leadership, every day seemed like things were much worse than I thought and I didn’t think it could get worse. It continually did.

Last week I worked Airbus 319/320s. This desk can be difficult on any regular day. This week was hell and each day got worse. It culminated on my Friday. We expected to see a lot of canceled flights. Yes, there were some but not as many as we expected. We also had less crew problems than expected. We were told cancellations were coming. It was like waiting for the enemy to attack a position we defended.

At some point of day the chief pilot on duty, a female that day, was talking to a coworker next to me about a pilot who was supposed to fly one of my flights. The pilot was being a jerk. She had tears as she spoke. I’ve heard this lady speak with pilots in the past and she is always very professional. I’ve never seen her rattled before. I respect her very much. Anyway, she was fighting the tears and I was fighting the urge to get up and hug her. Finally, I got up and stood next to her and said, “Do you want social distancing or could you use a hug?” She leaned her head on my shoulder and said thank you.

The cancellations finally were dropped on us around 1 PM. There were so many our system crashed. About 30 minutes it was running again. The preferred way to cancel flights is to cancel like this: cancel a flight from point A to B and back. Our cancellations were a hodgepodge. I heard the cancelled flights we the ones that had no pilots. Consequently, there were many planes that were, as we call it, out of balance. I’m not lying or exaggerating when you hear whet I’m about to say. I had one plane in Los Angeles and the next flight was due out of Raleigh, North Carolina. Another was in San Diego and owed out of Boston. We had to cancel many more flights in order to balance planes. Several hours later we were done.

Since then my sister in law and daughter in law have lost jobs as well as some nieces. Also, I have been exposed to someone who traveled with someone who tested positive for the virus last week. However they last were together 3 weeks ago so we feel things are ok.
at March 23, 2020 No comments:

Talk about falling off a cliff.  It is amazing how everything has been doom and gloom lately.  I continue to be totally surprised and appalled at the level of insanity to which the world has succumbed.

Industries and world markets are falling in unfathomable ways.  Yes, I am completely shocked.  I spend my work days weaving through cancellations and doing my best to clean up the aftermath.  I do what I can to communicate timely information in this ever shifting landscape.

In the midst of more bad news from the company CEO and another round of cancellations, Salt Lake City has an earthquake.  It just happens my fleets this week have a lot of exposure there.  At the time of the quake, I have 2 planes on the ground in Salt Lake City and one about to land.  Thankfully, things begin to work out for the better.

I continue to pray for health and safety of those I love.  Just know you are loved.  Let us all band our hearts together since we are told we cannot be physically close.

May we trust God has plans for us that are for our welfare and not our calamity.  May we realize governments are not our salvation.  People in power tend to increase and hold onto it.  Meanwhile, I pray for our leaders that they will govern with wisdom for the welfare of the whole nation and not for the gain or advantage of a few.

Thank you for reading.  While you are stuck in isolation, you should read a great book.  Mine!

I work for a major US airline in the operations centers.  With all of the craziness of the coronavirus spreading, travel has dropped off a lot.  Now with governmental travel bans from Europe, more flights are being cancelled.

The news media fills every moment with stories of the stock market losing money, sporting events being delayed or cancelled, and what you should do to be safe.  In an effort to just share some information; here is what has been happening in my office.

Since the airline doesn’t operate without this office where I work, we have another facility in the event this office somehow becomes unusable.  For instance, last year we worked at the backup site while renovations were done in the primary office.

Since the virus is mostly spread due to close contact, a major concern is if one of us get it, many of us will shortly thereafter.  The decision was made to split the workforce and have some work in each facility.  However, it was a few days before a plan was finalized.  In this case, day shift employees will work in the primary site and other shifts at the backup site.  Each office is to be fumigated after the shifts are finished.  We have sanitary wipes and hand sanitizer so I’m not too concerned.

We have to cancel flights.  To date, many routes have been cancelled.  Most of them are international destinations.  Consequently, we have extra wide body planes sitting idle.  Some smaller planes that were slated for retirement later this year are being retired earlier.  This in itself isn’t difficult but then you must consider the flight crews.

Flight attendants work every fleet type but most pilots cannot.  Therefore, if you retire smaller planes, some of the pilots will not work as much.  Pilots of bigger planes will also have less scheduled work but can get some back if flights are substituted with the bigger planes. I have limited knowledge of crew work rules but there are restrictions that affect what is done and how.

Since bookings are down, airlines need to cut costs.  Therefore, flights, domestic and international, are being cancelled here and there.  Some regularly scheduled heavy maintenance may be delayed.  Cabin modifications might be delayed.

There is also an issue of the cancellations themselves.  Not every flight goes from point A to point B and back to A again.  In those cases, you would simply cancel the round trip and you are done.  What if you have to cancel that goes from A to B to C to D?  Somehow, you have to get the plane from A to D and that probably means flying the plane there without passengers.

Probably the biggest issue is what to do with planes that will not fly.  If only one airline is grounding planes, there are still plenty of places to park them.  However, all airlines are cutting back.  Therefore, finding concrete to park them is at a premium.

I hope this bit of information is enlightening.  Stay safe.

With voices of pain
A torrent of tears
Flooding my soul 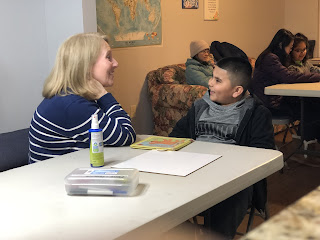 In this vast world, we are made to commune with each other. Whether it is love, joy, beauty, empathy, apathy, anger, or hate, we are connected. For all the technology and wonderful things made to enhance our lives, not one of them will affect you the way another human will.
Let us live to love

It is hard to believe how things have changed in the last month. February 14th came and we received a record payout for profit sharing. No ...